Today Ben and Jonah had their first recital performances! Ben played a piece on the piano, and Jonah had a duet on drums with his friend, Nick. They were awesome! I was way more nervous than they were. The boys always amaze me with their calm and confidence in circumstances when I would be a wreck. I don't know where they get this ability to stay calm. They stay positive and sure of themselves even in situations where my hands are sweating on their behalf. 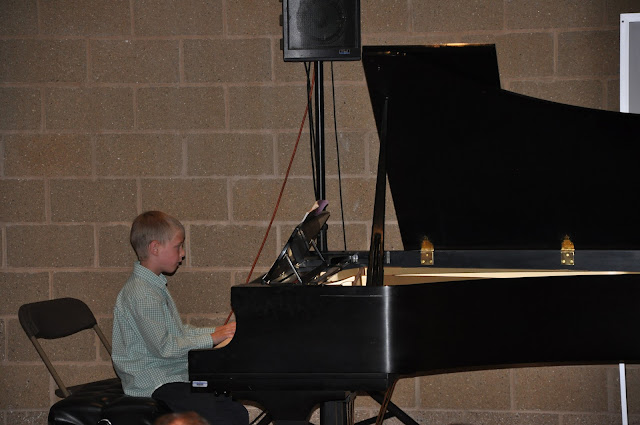 They amazed me today, these little boys of mine. 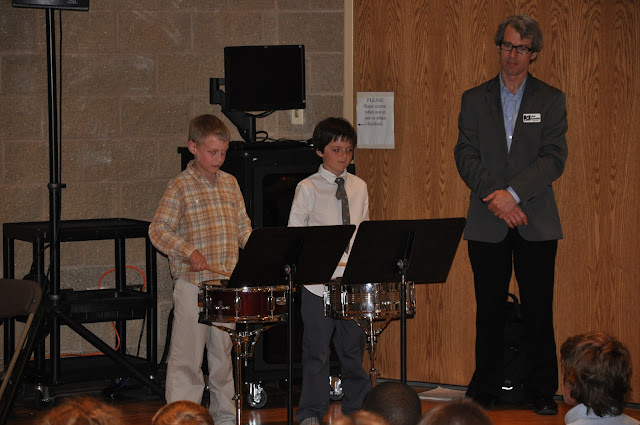 While Aidan was not thrilled about having to attend TWO recitals today, Jonah and Ben's biggest fan was so proud to show her support for her big brothers. Not sure the outfit is recital-worthy, but she happily cheered on her brothers, so that's all that matters. 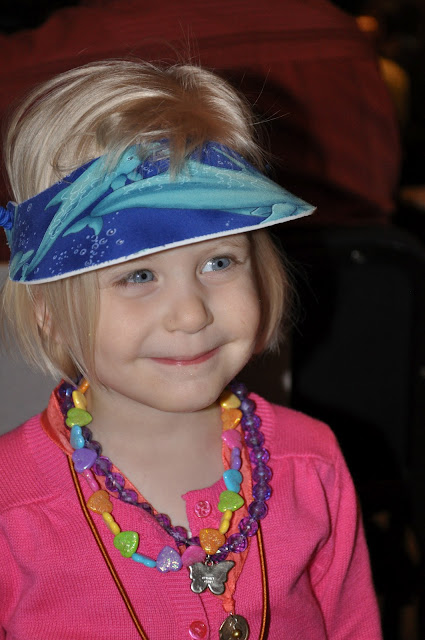 All three sets of grandparents were able to come today to see the boys' recital, and my brother and his family came too. In the morning, Alex and I were dashing around the house, doing that last minute cleanup. No matter how much you clean ahead of time, somehow the crumbs and toys from four energetic kids re-accumulate, so there's always a crazy couple of hours before the party begins where we do another cleanup. Getting six people ready in the midst of the cleanup is no easy feat! But Alex and I pretty much have it down to a science.

We were in the middle of our crazy morning when Alex came upstairs where I was finishing getting ready and he was about to take a shower. In one breath, he said "oh, you look so pretty!" and "oh, your daughter stuck a bead up her nose." ELLA!
Daddy was able to extract the bead with no harm done and no visits to the ER. This little girl has quite a history of sticking things up her nose. 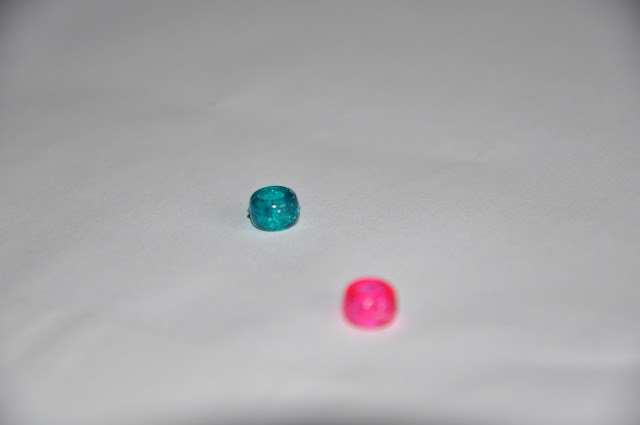 There was the corn incident. About 9 months ago, I had invited a couple of the boys' friends to stay for dinner because their mom was busy and they were already at our house playing so they might as well eat with us too. I made a great, healthy dinner. I stepped away from the table to get the boys second helpings on corn and chicken. When I came back, I noticed Ella had what I thought was a weird-looking booger in her nostril. I got her to blow her nose a little and a kernel of corn came out! None of my other kids have ever stuck anything in their bodily crevices, so this was a new experience for me. We all laughed and continued eating. Then I looked at Ella and thought, hm. I wonder...so I looked up her nose and saw more yellow.

Her brothers made her laugh and out came another piece of corn from that cute little shnoz. I looked up there again, and yes, there was ANOTHER piece. No matter what I tried I couldn't get that kernel out. So I called the pediatrician and thought for sure we were headed to the ER. The nurse that I talked with asked at one point "Well, how long was Ella alone that she could have stuck 3 or more pieces of corn up her nose?" Excuse me? Are you calling ME a neglectful mom? I walked into the kitchen, walked back, that was it! The nurse obviously didn't know my 2 year old daughter, who can get into mischief very quickly.

Turns out you can survive with corn stuck up your nose for a long time before it has to be extracted. Meanwhile, the boys and their friends thought this was definitely the most hilarious thing that had ever happened in their entire existence. Very helpful.

The doctor said if the corn wasn't out by the morning we should come in to the office. So we made an appointment and went in to see the pediatrician the next day. The doctor brought out a whole tray of interesting little tools that looked capable of causing a lot of pain, or making cool designs in playdoh. But no matter what that doctor did, he couldn't get the corn out. Poor Ella was screaming her head off. I of course got the privilege of holding her down during this, and would hold my breath as the doctor surrounded the piece of corn with a tool and tried to pull it out, only to have it slip farther and farther up Ella's nose. The doctor said we may be headed for the hospital.

Finally Ella got some drops of medicine in her nose, which made her scream more, and after about an hour of mushing that corn around in her nostril, the doctor was able to pull out the snotty piece of corn and a lot of boogers. Delightful. All that drama over a piece of corn!! Ella talked about it for months. She would say "Cohn. Up nose. Doctor. Ewwww." You would think she would have learned a big lesson that day. Not so.

Then there was the pebble incident. While waiting outside Aidan's new kindergarten classroom on the day of placement testing last Fall, I had Ella with me. She was puttering around with whatever she could find that amused her, and a couple friends and I were talking and watching her at the same time.

Then Ella came to me and pointed at her nose. I said "What did you put in there??" She pointed at a lovely pot in front of the kindergarten classroom that held a large palm tree made out of paper. The pot was filled with small pebbles to hold the tree up. It was a very cute, creative display, but to my 2 year old it was filled with things to shove up her nose.

Luckily, I got all the pebbles out without having to go to the doctor. I really would have been called neglectful after that! So today when she stuck the bead up her nose, I couldn't believe it! After all the times we've talked about not putting things in bodily crevices that don't belong there, she should know better as an almost-three-year-old, right? Apparently not.

Ella almost derailed our tightly timed morning of Final Cleanup and Mad Dash to Get Everyone Ready Who Doesn't Feel Like Cooperating. Silly girl. She does have spunk, that one.

So our day was a huge success. Jonah and Benjamin did such a beautiful job on their recital pieces. It was a new experience for them that really went well and another boost to their self-confidence. Spending the day with our families was so great, watching our kids play with cousins and bond with the grownups always makes me smile. And Ella didn't have to go to the ER for what will now be called The Bead Incident.

Carrie
I am a Missionary Pastor's Kid (MPK), and spent the first 13 years of my life in Africa. I have a background in psychology and social work, and got my MSW just before our twins were born 3 months prematurely. Prior to having kids, I worked in a variety of social service settings, mainly with people who had special needs. I am blessed to be the mama of four incredible kids, all of whom have some type of special needs. It can be chaotic in our family, but the chaos makes us cherish each joyful moment even more.